It was like a pageant with group after group preceding the  coming of the king—first a pink troupe of dancing angels, then a thousand golden cadets  marching as one; and finally  silver— the heavenly choir.

I like meals that have everything cooked together. They certainly simplify serving. Each ingredient fits with all the others. Here is one that is quick, delicious and almost impossible to mess up.

Pasta with Chicken and Asparagus

1. Peel the last one to two inches of the asparagus and cut them diagonally into 1/2 inch pieces. Cut the rest of asparagus the same length.

3. Grate the cheese. Use a fine grate and don’t pack the cup.

1. Place the chicken breasts on a microwave safe plate; cover with waxed paper and cook for 8 to 10 minutes or however long it takes to get them done in your microwave. Don’t overcook them, however. It would be best if they were slightly underdone because they will be cooked a little more at a later time. Set them out to cool after they have been cooked. When they are cool enough to handle, cut them into bite-sized pieces.

2. Bring a large pot of water to a boil. Add the pasta. It doesn’t have to be Rotini; Penne would look good too. Use whatever you have, except for Lasagna noodles. They are a bit large. 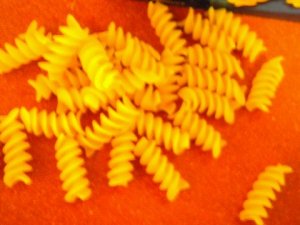 3. In a large skillet, make a chicken veloute (visit Mrs. Whitesauce in the Chicken and Walnuts in a Tarragon Sauce post). Cook three tablespoons of butter and three tablespoons flour for one to two minutes. Add the two cups of milk. Stir until thickened, then season with nutmeg, salt and pepper, two teaspoons chicken bouillon granules and 1/2 teaspoon garlic powder.

4. Place the asparagus in a microwave safe dish with 1/4 cup water and cover with plastic wrap. Punch a couple of holes in the plastic for steam vents. Cook for six to eight minutes.

5. Add the asparagus and chicken to the veloute. Stir in the Asiago cheese. Simmer for a minute. Then taste and adjust the seasoning. Ask yourself, “Would I like more salt or pepper? Does it need more cheese? Has the sauce thickened too much?” Add more milk if you would like it thinner.

Serve: Divide it all among the dinner plates. Sprinkle with parsley and drop a few slices of black olives on top. – Serves 4

Tip: When peeled, the bottom 1  1/2 inches of an asparagus spear is the tenderest part.

Bonus Tip: I (RuthAnn) have come across a list of 60 ways to use salt that you may not have known before. Here’s one that worked for me. Freshen sponges by soaking them in warm salty water for a while.

For our entree today, we have combined several different ingredients into a oneness. From chicken to pasta, from asparagus to black olives, from nutmeg to a cream sauce that binds all together, they are more than the sum of their parts.

Wm. Paul Young in his book The Shack depicts the oneness of the Trinity in a whimsical way. He pictures the Father as the big Mammy who keeps the hearth fires going and the hearty food coming. She loves you to pieces. Jesus is a muscular Middle Eastern laborer wearing a belt bristling with tools. He’s the one who fixes things around the place. And the Holy Spirit is an ethereal Oriental girl, who shimmers and collects tears in her tiny glass bottle. They work as one to contribute to the recovery of Mack, a dangerously depressed father. They are a unity.

South African preacher Andrew Murray writes of the Trinity more seriously. He writes that the Three are One. “We need to enter ever more deeply into the truth that none of the three ever works. . . independently. The Son reveals the Father. . .the Father reveals the Son. The Father gives not Himself but the Spirit. The spirit speaks not of Himself, but cries, ‘Abba, Father.’ ” The Son is our sanctification. Yet we must bow to the Father for Him to establish us in Christ. (Quiet Times with Andrew Murray, p. 20, James S. Bell, Jr. editor). 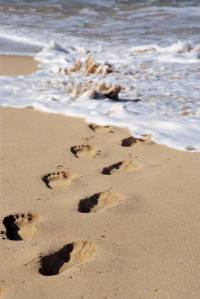 I think the selflessness and synergism of the Godhead is amazing. “And that is not all; that is not all.” Christ calls believers to be one with each other just as He is one with the Father (John 17:21). He says if we exhibit the Trinity’s kind of unity we will be powerful to woo others to Christ. Hmmm. That’s quite a challenge.

Where to start? Well, maybe we could begin with a list, a survey—Who is important to you? With whom do you feel unity? What makes for unity in those relationships? What can you do about the divisions between you and the others on your list?

These are things we can contemplate as we seek to emulate the selflessness and unity of our wise God.

This entry was posted in Entreés, Sauces. Bookmark the permalink.