This recipe fascinates me and I think it will fascinate you. Brussel sprouts are cruciferous vegetables, in the same catagory as cauliflower, cabbage, mustard greens, kale, broccoli, radishes and watercress. God made brussel sprouts good for the heart and good for the soul, especially if you add a touch of maple syrup.  So let’s open Dale’s new treasure of a recipe.

Brussels Sprouts with a Maple Glaze

I saw this idea in a magazine but the magazine recipe made it much more complicated than it needed to be. I merely simplified it. The subtle sweetness of the maple syrup enhances the complex sweet/bitter flavor of the sprouts.

1. Fill a large sauce pan with water. It is important to have plenty of water. The sprouts must be able to move around with the rolling action of the water so that they will cook evenly. If they do not move about, the sprouts on the bottom will be over cooked and the ones on top will be under cooked.

2. Boil the sprouts until they can be pierced with a fork with a little effort. It is best to under cook them because they will be cooked more with the glaze. They should still be a bright green at this point.

3.  When done, drain the sprouts thoroughly, then put them back into the same pan over a medium heat. Let any water that came with the sprouts evaporate, but do not let the sprouts brown

4. Add 1 teaspoon of butter per serving, to the pot, a little salt and one tablespoon per serving of maple syrup. Gently roll the sprouts in the syrup mixture while it thickens slightly

5. As soon as the glaze thickens, you are done! 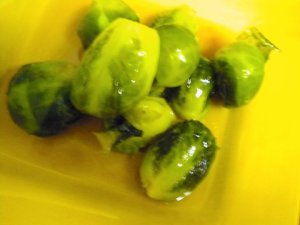 Heidi, the Brussel Sprout: I’m so glad we’re having coffee together today. I’m just desperate to talk to someone. My leaves have gotten all stirred up lately.

Heidi: That’s just it, I thought I was going to make it into the boiling pot at last. My lady took me out of her brussel sprouts bag, examined me, took off my hair bow and a layer of petticoats, then dropped me into this bowl. She didn’t use any of us, and we’ve spent too much time in that refrigerator, wasting our nutrients.

Herman: Well, that’s what comes of being bitter. Not too good to be around others when you’ve got a root of bitterness. Maybe I can dig it out with my trusty scoop.

Heidi: Oh, no you don’t. I don’t want you fooling around with my heart. And don’t you be pointing at me. You’re just as bitter. Admit it!

Herman (big sigh): Okay, okay. You’re right though. My humans need my nutrients. I’m high in Vitamin C which helps prevent infections. And both of us have lots of Vitamin K which prevents hemorrhage. Still, they’d eat more of us if we tasted better.

Heidi:  Vitamin C is good for the eyes and the skin too. But why did God make us so bitter? You think Jesus would have interceded for us. I don’t like it; I just plain don’t like it. Gives us a bad reputation. (rolls up a loose white leaf around her waist for a touch of style)

Herman: It helps when they put butter on us, or so I hear. Sometimes I get to chat with the brussel sprouts that are cooked and ready for dinner. They say they feel well-dressed.

Heidi: But that just makes us salty, and it’s not very healthy you know.

Herman: Sometimes my human makes a cheese sauce to pour over her brussel sprouts.

Heidi (retying her new white belt): There. Isn’t that a nice contrast to my green outfit.

Herman: Hmm! Nice round bulge you’ve got there.

Heidi: (flutters her eyelids at Herman) Cheese sauce? That turns us into a soft goo, and it’s not even sweet. And besides, my lady’s husband has high cholesterol and milk and cheese aren’t good for him.

Heidi: Oh dear! We better hide. You never know what he’s going to do. Look, he’s pulling honey and maple syrup from the shelf.

Herman (taking off his handyman’s hat so he can see better):  Probably going to make some pancakes. And biscuits too maybe. Wow! He’s opening up a Bible.

Herman: I think I know a way we can find out. (Plops his handyman cap back on his head and tugs a whisk from his tool belt) I’ll stir things up a little.

Heidi: Hey there, watch out. You’re messing up my hair. Hey, that hurts. “H-e-l-p—(falls out of the bowl onto Dale’s Bible)

Herman (comes tumbling after her): Whew! Where are we now? (scans the line of scripture where he’s landed. )

Dale: (surprised) Well, hello there. Now aren’t you a pretty little thing. (Moves Heidi to the other side of his Bible). Let’s see what you discovered young man.

Herman: ( adjusts his cap and assumes his best posture)

Dale:  “The fear of the Lord is pure, enduring forever. The ordinances of the Lord are sure and altogether righteous. They are sweeter than honey, than honey from the comb.” Hmmm! (Looks at Heidi and Herman, then at the honey and maple syrup.) Bitter, sweet,  sweeter, bitter: , a perfect combination. Makes me think of that verse that says something about God turning a curse into a blessing. Oh, not that you’re a curse, young man and young fashionable lady. You’re a blessing but people simply don’t realize it.

Heidi (in a loud whisper): Oh Herman, what’s going to happen now? Do you think?

Dale: (picks Herman up) Let’s try this. (Pours half a teaspoon of honey over Herman’s head and tears the bill off of Herman’s hat.) Crunch, crunch. Good, but how about—?

Dale: The thing about maple syrup is it has less calories than honey and it contains lots of manganese which improves the health of the heart and zinc too, good for the immune system.

Herman: Are you talking to me?

Dale:  And it makes me feel young, conjures up the essences of tapping maples in the woods.

Heidi: Oh, he’s always talking to himself. Now I bet he’s referring to my favorite book in all the world, Little House in the Big Woods. Mama used to read it to me when I was a little tyke in the garden patch. Maybe we’ll be famous. (Fluffs up her hair.)

Dale: (singing as he washes Heidi and Herman and all their friends in the earthenware bowl.) “Tis so sweet to trust in Jesus, just to take him at his word. Just to rest upon his promise, just to know, ‘Thus saith the Lord.’ ”

Dale: (mixes up a small bowl of maple syrup, melted butter and salt) Well, Dale old fellow, I’m mighty pleased with you. You had another great idea. (Pauses and looks at Heidi and Herman, then looks upward.) Or was it my idea?

This entry was posted in Uncategorized and tagged Cooking Devotional, Easy Gourmet. Bookmark the permalink.